ProMo helped make a series of videos showcasing the contributions and experiences of members of multicultural communities across  Wales. This project aimed to bring about a  narrative change that discusses the role of BAME people in Wales, not as victims, but as net contributors to the social economy and asserts a more inclusive notion of Welsh identity, focused on strengths,  contribution and mutual help. 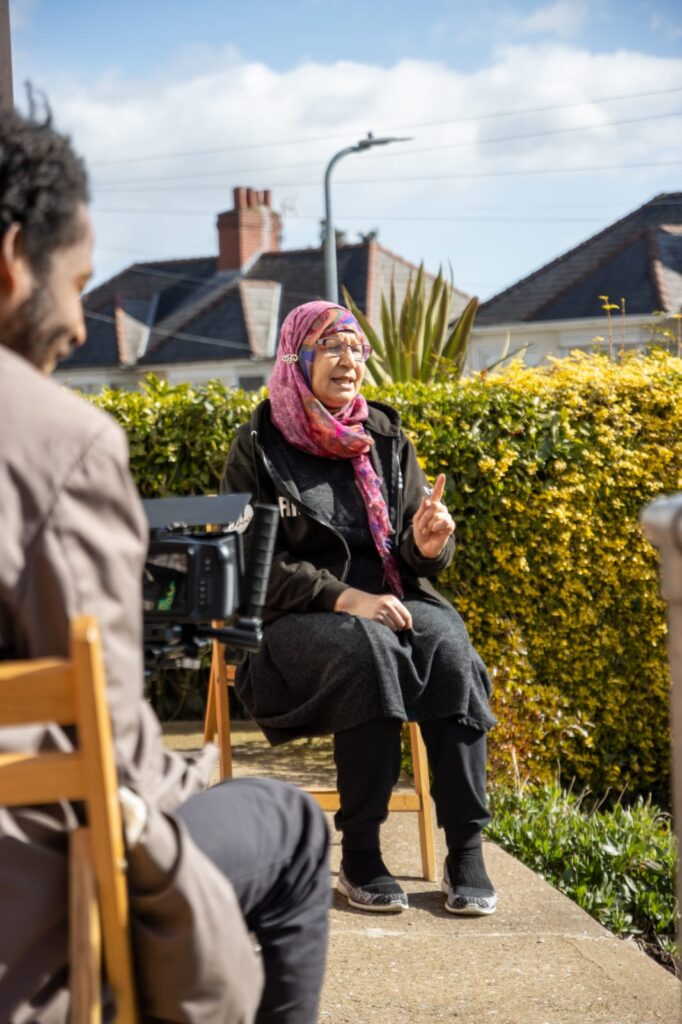 Filming participants on a sunny day

We worked with 4 Citizen Journalists – Martin Williams, Onismo Muhlanga, Lauren Clifford-Keane and Shazia Ali – , who documented and captured the stories and experiences of individuals from diverse backgrounds in different parts of  Wales. The interviewees were people who gave selflessly to others in their local communities during the Covid-19 pandemic. Using their stories, we worked with the Citizen Journalists to support them in the creation of 21 short films. The films were aimed at 3 key audiences: political leaders, community groups and young people.

ProMo trained the journalists how to interview and capture stories via Zoom, and designed guidance on safe in-person interviewing protocols during the pandemic, ensuring that both the interviewees and journalists felt safe and comfortable during the filming process.

ProMo’s support allowed the Citizen Journalists to develop their own journalistic voice while keeping to a consistent approach. We used our video production and editing expertise to collate the raw footage into engaging final productions, keeping to the agreed-upon format and style.

21 short films were co-produced with the Citizen Journalists and are showcased on the We Are Wales website, alongside an Online Gallery and quotes from the participants. The films were showcased at three separate events across South Wales: Swansea, Cardiff (Chapter Arts Centre) and Newport (The Riverfront).

One of the citizen journalists Shazia Ali spoke to BBC radio Wales about the project, saying:

“it’s the idea of what can we do to strengthen those connections again, build trust, build community – whether that could be community empowerment in a way. I think projects like this definitely have a sense of empowerment – the idea that it is building community power by telling the stories of communities who often don’t get the chance to share those stories.”

“Working with the people featured in We Are Wales has been truly inspiring and I’m so proud to have been able to tell their stories on a wider platform. I’d like to thank all of the participants for their time, involvement and generosity in this project.”

“I think the project gave underrepresented people an opportunity to shine and gave them a platform that they are not normally invited onto – and to be awarded with certificates of appreciation, signed by the Welsh Government Minister for Social Justice, and to receive recognition for the work shows the strength of the Black Lives Matter movement.  I was extremely impressed working with the journalists of We Are Wales, especially given Lauren’s knowledge and talent – She managed to capture my year and a half’s journey into one short film.”

“ProMo is proud to be part of the We are Wales project. Highlighting, giving voice, representation, sacrifice and the brilliance of citizens from ethnic minorities in Wales. This project moves to enhance and build Welsh Identity from the many people that create Wales.”

If you would like help to train community journalists get in touch with dayana@promo.cymru