Why did Public Service Broadcasting record at EVI?

Public Service Broadcasting‘s highly anticipated third Album Every Valley is released today. Why is this significant for ProMo-Cymru?

Public Service Broadcasting chose to record their new album in Ebbw Vale Institute. EVI is a regeneration project that ProMo-Cymru has been working on with the community for the last 10 years.

Not only was their album recorded there, but in June they put on two spectacular shows, where they launched the album to a sell out crowd.

EVI is the oldest institute in Wales dating back to 1849.

When ProMo-Cymru took over EVI, the building had been abandoned and fallen into a state of disrepair. Like many other Institutes or community buildings in Wales, it was believed that the Ebbw Vale Institute could not be sustained. Many felt it had closed its doors for the last time.

However, on the 8th June 2017, I stood amongst hundreds watching Public Service Broadcasting launch their album Every Valley in that very building. I was surrounded by locals, Londoners and travelling fans. In fact I was stood next to the local male voice choir that feature as guest vocals on the album.

“Living in South Wales you can’t get away from the history, but there was something about the way PSB told the story in such a unique environment that was very special.”

On Every Valley John Willgoose and his band take us on a journey down the mine shafts of the South Wales valleys. They use music to explore history, hence the name, using clips and archive footage in their recordings and visuals. The energy and emotion was overwhelming. We watched stills and moving image of the South Wales coalfields and young local boys working underground with faces black from coal dust. Living in South Wales you can’t get away from the history, but there was something about the way PSB told the story in such a unique environment that was very special.

Public Service Broadcasting spent the whole of January in EVI.

PSB hired the hall, kitted it out exactly as they wanted it, and used the space to record Every Valley. They also invited in guest vocalists from Wales including James Dean Bradfield of Manic Street Preachers and Welsh singer Lisa Jen Brown.

I was lucky to get to speak to John Willgoose following the gig. I asked him about his experience of using the facilities and why they chose this location.

John told me that he had always been inspired by American rock band My Morning Jacket, who had hired a huge hall, kitted it out and made a record in it.

“It felt like a really DIY way of doing it and when I saw a picture of the EVI hall it felt right.” John’s wife had actually come across EVI whilst searching for locations. The building also has its own studio, Leeders Vale, so it was the ideal location.

I asked him why Wales, why the valleys? John said that they’d wanted to do an album about the mining industry. The record is a metaphor for much larger global issues. The Welsh mining industry was chosen as a way to, “shine a light on the disenfranchised”.

“…when I saw a picture of the EVI hall it felt right.”

John said that the strength of the community in Wales really impressed him. It became apparent that this album was actually very much around community.

“Wales appealed to me, the nature of the valleys, these communities were reliant, shaped by and fuelled by the mining industry.” 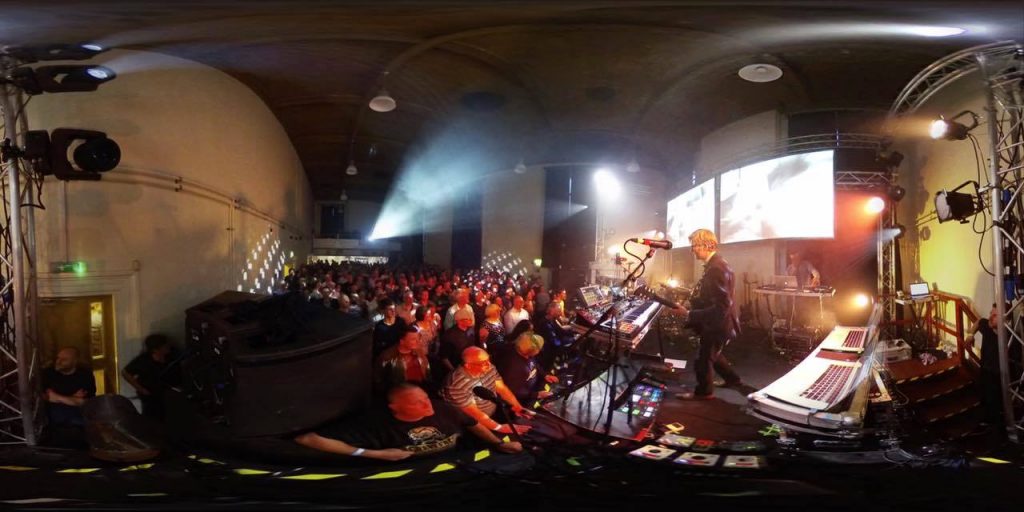 For anyone living in the area, these words are not a surprise to us. The valleys have an amazing depth and are steeped in culture. But the valleys also often struggle to have a voice in the world. However if you are lucky enough to visit, you can’t help but hear it.

John told me that they were, “not evil vampiric Londoners, sucking history out of Wales to make an album.” They really were there to learn, listen, promote the history and be part of it.

These experiences are what make all the hard work worth it. There are 6 staff that work at EVI. It is sustained from revenue it makes from room hire, the 1849 community café (serving amazing pizza, paninis and even tea and coffee to gig goers!), the studio, a bar and venue hire. There are classes, music rehearsal rooms and one of the best studio set ups in Wales.

It is a surprise to find a place like this in the middle of the valleys. They were genuinely humble when I told them how much this was an iconic moment in the history of EVI. There was a mutual appreciation. They were thankful to have found us, and us in awe at what an incredible moment it had been for the community.

Any advice for aspiring musicians?

ProMo-Cymru is a social enterprise working to develop young people, so I took the opportunity to ask for some advice for any aspiring musicians..

“Work very hard, practice hard, play as much as you can (and afford to), get out there. No one will come and find you. You never know what’s out there and I didn’t get anywhere until after 30. Just when I stopped thinking it would happen, it did, so stick at it.”

Thank you John and the band, we loved having you.

“It’s fantastic, I loved being there. It is a special place, at the centre of so many good and positive things” -John Willgoose, Public Service Broadcasting, June 2017

If you’re interested in using some of the amazing spaces at EVI please get in touch:

And if you’d like to work with us on a community and cultural development project, then contact us on 029 2046 2222 or info@promo.cymru