As part of National Young Carers’ Action Day, ProMo-Cymru partnered with YMCA Swansea to co-produce a video with a group of Young Carers, sharing their experiences and amplifying their voices.

On average, there are 3 young carers per classroom in the UK. However, there is little opportunity for education and raising awareness of young carers. Consequently, support may be difficult for young people to provide for their peers, or find for themselves.

The purpose of the project was to raise awareness among young people about what a young carer is, what they do, the challenges they face, and where you can seek support if you are a young carer. It was decided that the best way to do this would be to create an animated video. This would be created bilingually, both in English and Welsh.

ProMo-Cymru met with young carers virtually to work toward the creation of the video. The online sessions were created to empower young people whilst being considerate of their feelings and experiences.

It was essential for us at ProMo-Cymru to anchor the story around the experiences of young carers and involve them in the creation of the video. By teaching young people the phases of production, they were able to be participate in everything, from storyboarding, to scripting, to the voice-over for the animation.

“We wanted to give them this opportunity because we believe in their creativity. The unique insight you gain from a young carer’s experience is powerful”, said Daniele, who was leading on the project. 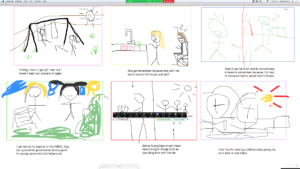 ProMo-Cymru provided an opportunity to co-produce a successful video which included the experiences of Welsh young carers. The video was released as a celebration of Young Carers Action Day, which took place on March 16 2021. The final video was shared on BBC’s Children In Need to raise awareness of young carers and generate donations for a good cause.

If you’re interested working with us to create videos to support young people, contact Dayana at dayana@promo.cymru